WHAT ARE SHINGLED SOLAR PANELS?

Conventional solar panels use various numbers of solar cells depending on the desired output of the panel. The solar cells are laid out across the panel with spaces between them.  They are electrically connected together using copper busbars (ribbons) by means of high temperature soldering processes.

The solar cells are laid out across the panel with spaces between them.  They are electrically connected together using copper busbars (ribbons) by means of high temperature soldering processes. 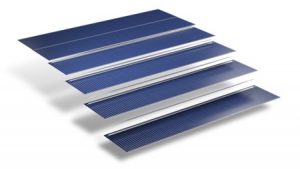 The more copper busbars used the less resistance losses and hence the more efficient the electrical connection.  This is one of the reasons many solar panel manufacturers have increased from 3 busbars to 4, 5 or 6.   However, having more busbars covering the cells means there is less of the solar cells exposed to sunlight, reducing output of the cells by as much as 3.5%.  There is typically over 30 metres of busbars required per solar panel to enable all of the connections. 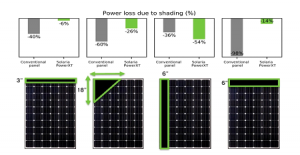 Shingle solar cells are solar cells which are cut into typically 5 or 6 strips.  These strips can be overlaid, like shingles on a roof, to form the electrical connections.  The strips of solar cells are joined together using an electrically conductive adhesive (ECA) that allows for conductivity and flexibility.

1).Less Energy Loss Due To Shading

Conventional solar panels have the individual cells wired in series so when a part of the solar panel is shaded it can have a significant effect on the level of power output.  By configuring the solar cells in shingles, they can be wired in groups and configured in parallel which significantly reduces the losses caused by shading.

Shingle solar panels do away with approximately 30 metres of busbar and soldered joints that is required on conventional solar panels, so busbar failures are reduced.

Static and dynamic load tests show that the shingle approach is more resistant to failure due to external forces being applied to the solar panel compared to conventional solar panels.

For more information about Bluesun Solar Shingled Solar Panel, please do not hesitate visit our website or send us inquiry at any time.

COMMERCIAL ROOFS WILL LEAD THE GROWTH OF RENEWABLE ENERGY  Although the IEA’s latest renewable energy report predicts a significant increase in solar energy, it still feels a sneak peek, it has come up with conservative estimates, and it is foreseeable to share costs with grid [...]

SUCCESS FACTORS FOR HYBRID MICROGRIDS When it comes to hybrid microgrids, writes Fabian Baretzky, senior business development and sales manager for Dhybrid Power Systems, the incorporation of various sources of energy and complex requirements for long-term stability of the energy supply require expertise and an [...]

VERTICAL PHOTOVOLTAIC POWER STATIONS ON ALPINE DAMS Axpo, a utility based in baden, is building a 2-megawatt facility at the Muttsee reservoir in Glarus, Switzerland.The plant is expected to achieve high levels of power generation, particularly throughout the winter. Several studies have shown that photovoltaic systems [...]

BIFACIAL SOLAR IS READY FOR PRIME TIME Better system economics, higher energy yield, and more robust modeling and field data are driving demand for bifacial solar modules. There is no doubt that bifacial modules are ready for their breakout role in the world of solar photovoltaic [...]

THERE IS ROOM FOR PV OF ALL SHAPES AND SIZES IN AFRICA Offgrid solar power has emerged as a vital part of the PV business across the African continent, and is now spreading to other parts of the globe, mainly with solar home systems and [...]

COVID-19 IS HEIGHTENING THE STAKES FOR OFF-GRID SOLAR IN AFRICA Covid-19 is testing energy infrastructures across Africa, and against this backdrop, off-grid solar is likely to play an increasingly vital role on the continent. “Without energy, we can’t fight this,” said Bill Lenihan, CEO of [...]

ADVANTAGES OF GRID-TIED SYSTEMS 1. It can adopt distributed construction, can distribute power nearby or on the spot, and can enter and exit the power grid flexibly. It not only helps to enhance the power system’s ability to withstand some disasters, but also improves the [...]

SINGLE-AXIS SOLAR TRACKING FOR THE NEXT 30%

SINGLE-AXIS SOLAR TRACKING FOR THE NEXT 30% NEXTracker has refined its successful NX Horizon single axis tracker into the rugged two-in-portrait NX Gemini. The new design opens up land once considered too rough to be developed to generate near comparable amounts of electricity, while easing [...]

SOLAR CAPACITY COULD SOAR WITH ELECTRIFIED TRANSPORT AND HEATING

SOLAR CAPACITY COULD SOAR WITH ELECTRIFIED TRANSPORT AND HEATING With wide adoption of electric vehicles and heat pumps, Colorado’s least-cost grid would reach 21 GW of solar capacity, 12 GW of wind, and 7 GW of storage by 2040, while electric rates would decline. These [...]

ENERGY STORAGE GROWTH CLUMPY BUT BROAD IN 2019, NEXT YEAR IT TRIPLES

ENERGY STORAGE GROWTH CLUMPY BUT BROAD IN 2019, NEXT YEAR IT TRIPLES For battery power, it was the fifth highest volume deployed while battery capacity was the third highest month. The research group noted 32% growth in megawatts deployed over Q2’19 in the above image, while [...]